We’re halfway there! I can’t even believe that it’s already been 8 weeks of training and that there are only 8 more weeks to go! I started off the week with one of my now favorite out and backs. I enjoy any time that I can run downtown and take in the historic views. Wednesday I headed to one of my favorite hills (can you believe I said that?) and did my best at some repeats. I enjoyed running these because I had a small loop at the top to continue with instead of stopping at the top of the hill. It also helped to add up the miles. I felt really good after this run and feel more confident about hill running and the marathon course.

Not only was the workout a successful one, but those six miles helped to put me at my highest month of mileage yet. Three cheers for running!

Remember when I said I had made it this far without an injury? Well, I’m not injured, but my body, specifically my knee was really sore Saturday. As in so sore, it started bothering me within the first 5 steps. The Second Sole Medina store had a group run at 8:00, so I figured I’d run down there and if it still hurt I’d just turn around and figure out plan B. The pain started to go away but I still felt blah, it was a lot more humid than I expected and I probably shouldn’t have had that large glass of wine the night before. By the time I got to the store I had three miles done. There were a few guys outside and I was hoping someone more my pace would show up. Turns out these gentlemen were from MCRR. I hadn’t seen them before but they gave me some good insight on my running. I waited until after 8:00 and no one from Second Sole showed up. At this point, I realized I would be on my own and headed to a path that the MCRR guys mentioned.

A change of scenery was nice and I ran the next  four miles without music, taking in the sounds of nature and all it had to offer. 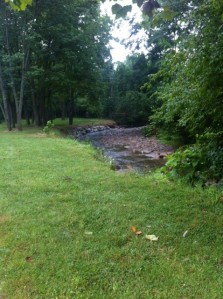 Quiet little stream in the park

I ended up back at the square, refilled my water and headed out for a short out and back. I had to be at home by 11, so I needed to do the rest of my runs closer to home. It was starting to get warm and my legs were starting to hurt, but once I took a few Sport Beans I was feeling better. Around mile 10 I attempted to take a Blueberry Pomegranate gel, and immediately threw it out after one gulp. Lesson learned, that’s not my flavor. So I headed home to grab a granola bar and fill my hand help with colder water.

I was at mile 12, and only had 8 to go. I headed out on a short loop for three miles and my body started to give up on me. Even after stretching my knee and hips were tight. I had the same pain in my knee from last year and this time it wasn’t going away as I kept running. I headed to the tree covered path, hoping this would help to keep me energized. I could feel myself slowing down and I even started to walk the hills. After I hit 13.5 miles I started the dreaded walk-jog. I knew if I headed home, I’d have 15 miles for the day, not an easy task, but certainly not the 20 I needed to get in. I stopped, stretched and asked myself if 5 more miles of pain would be beneficial to my running. I knew in the end it wouldn’t, so I called it.

I came home, iced, and rolled my legs a bit. I went over and over in my head what would make my knee suddenly start hurting, I felt fine when I woke up. And then it hit me, the high mileage. Not only was I putting some high mileage on my legs that I wasn’t used to, but I had pushed it on my shoes. I finished up Saturday with 359 miles on my shoes. They were pretty worn down and I knew the time to retire them was approaching, but it became clear that Saturday would be their last run.

I didn’t hit my first 20 miler, but I’m not going to dwell on it. It didn’t happen, and I need to focus on this next week of training. I still have plenty of long runs to go and some beautiful new shoes to break in!

How many miles do you put on your shoes? Would you rather run alone or with a run group?