Over the weekend, I ran my first race of the year. It was much shorter than I had originally planned, but I’m thankful I was able to run at all. It was exactly three months from my first day of absolutely horrible shin pain to the day I crossed the finish line in Dewey Beach, Delaware. Pain free, and wearing this biggest smile I’ve had in months.

When we planned this trip back in the winter, we decided we’d make the 8 hour drive. As it approached on Friday, it seemed a lot more daunting. We left Friday night after work, and made it about 3 hours before we decided to stop for the night. We picked up on Saturday morning, and made the rest of the drive through Pennsylvania, Maryland, and Delaware. Thankfully the packet pickup and expo didn’t start until 2:00pm, so we didn’t have to rush.

After a few stops for food, gas and outlet shopping, we made it to Dewey Beach. Packet pickup was held outside of The Starboard restaurant, and gave the event a bit more of a beach feel. Packets came with our bib, official race shirt and a custom Tervis cup. 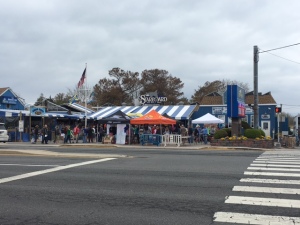 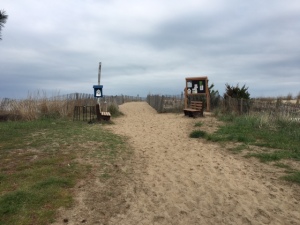 Pick up your packet, head to the beach!

From here we stopped at the beach, dropped our bags off at the hotel and went to find something to eat. We had been given recommendations to stop at The Lighthouse, but after stopping in, it wasn’t a place we wanted to test the day before a race. Instead, we crossed the street to the Rusty Rudder, and after a few turns down a few hallways, we found the pasta dinner and buffet that was set up for the race. The food was great and we had some amazing views of the sunset.

The views are ok…

The only thing left for the night was to lay out our outfits and try to get some sleep!

We woke up between 5:15am and 6:00am on race day. The marathon, half and 9k had different starting times, which was nice because I got to sleep in a few extra minutes. Michelle and Mo left early to catch the bus to the start, while Mallory and I took our time getting ready before heading outside to watch the marathoners run by. Luckily we were able to see Michelle and Mo run by before we headed down to the start for our own race. 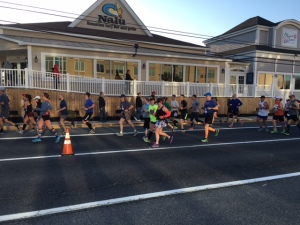 The bus line was quick and fairly empty, and the ride last 5 minutes at most. We were dropped off at the start, and had plenty of time to use the porta potties, relax and get in line.

Not your typical Ohio start line

At almost exactly 8:00am, we were off. We didn’t really have a plan for the race, other than to take it easy and walk if we needed. I had hoped to stay under and hour, but wasn’t going to put too much pressure on myself.

The first mile we ran along the coastal highway from the watch tower to a little outside of Dewey Beach. We had some views of the water, but it was mostly filled with high grass and some houses. I felt pretty good, but noticed I had some tightness in my left calf. It eventually went away and didn’t bother me the rest of the race.

Strong start to the race

From here we continued on into town seeing more shops and restaurants, showing it’s true colors of a little beach town. We also noticed how flat the course was, almost too flat. Which, had we been in perfect shape, it would have been perfect for a PR. We also had a bit of a headwind, but with the sun out, it kept us cool and wasn’t too much of a bother.

We pulled off the Coastal Highway and now we were running down Silver Lake Drive. We were able to run next to Silver Lake, which was absolutely beautiful, and picked out a few houses we wouldn’t mind buying. We still felt good, and didn’t have a need to push it at this time. Runners were starting to spread out, but it was also starting to warm up a bit.

From here we turned into a housing development and ran through a few different streets. We had a bit of shade from time to time, but nothing too helpful. We didn’t see too many people outside, but noticed a lot of cars and furniture on the side of the streets.

We turned back onto the Coastal Highway and knew we were in the home stretch. I grabbed a water and took a few sips at the water stop around mile 4. It was starting to warm up and I didn’t want to be too dehydrated.

We ducked off the highway again and back into some more housing developments where we finally had a decent amount of shade. Then suddenly, the first place half marathoner passed us. He was the only one we saw, and wondered where everyone else had gone. (He ended up finishing in 1:20, 6 minutes ahead of second place).

Mile 5 – 10:20
Once we hit mile 5, I knew we only had about .6 left to go. We were out in full sun and all of the tan colored buildings looked the same. Finally we ran past our hotel and all that was left was a turn to the finish. I couldn’t help but get excited and had the biggest grin the whole way to the finish. I think I almost started to tear up a bit as well.

All smiles into the finish

I was so excited to cross that finish line that I completely forgot to stop my watch, so I have no idea what my last split was. We grabbed our medals and water and headed to the beach. It was still relatively empty so we had plenty of room to spread out. Luckily they had a computer out where you could check your time, I finished at 58:33, meeting my goal of under 1 hour!

I ran the entire race without walking or stopping and I had no pain at all. Despite the fact that I was running a 10:27 pace, I could not be happier. A month ago, I had no idea if I’d be able to run, let alone run the entire race. I’m far from PR shape, but I’m running again and building myself back to where I used to be.

Overall, I think this was a great race. The packet pickup was easy and went fairly quickly. The race was very well run and according to Michelle and Mo, the full was the most beautiful race they’ve run. After the race, they had a huge party on the beach which included music and a full buffet of real food including chicken, pasta, salad, bread deserts and a few others. Plus, every runner was able to get three beers for free after the race.

I would highly recommend this race, especially since they did such a wonderful job and it was only their second year. The full and the half are a bit expensive, so signing up early is key. The 9k option was a lot cheaper, and almost an automatic PR for everyone since it’s not a common distance. If the drive wasn’t so far, I’d consider doing it again in the future.