This past week has been quite an emotional one, and I apologize to anyone who has been in my path. After the X-Ray didn’t show too much on my tibia, my doctor decided I should get a bone scan done. So Tuesday morning, I headed off to the hospital for part 1 of my scan. I had never done a bone scan before, so I honestly wasn’t sure what to expect. But if it was a way to find out what was wrong, then I was on board.

Around 10am I was called back and injected with radioactive dye. I was scanned a few times, and then I was on my way. It was more uncomfortable than painful, but a lot easier than I expected. I was told to come back three hours later for part 2. Because of the inconvenience of the procedure, I ended up taking a vacation day, so with three hours to waste, I did a little shopping. If you’re going to spend a vacation day at the hospital, you should at least make part of it fun, right?

I got back to the hospital around 1:30 for scan number two. This one took longer, and they did a series of shots. I was told that over time, the dye went from my blood, and was now sticking to damaged parts of my bones. Interesting, and weird. I wasn’t given any results that day, but would have my follow up appointment that following Friday.

Surprisingly, the next two days I had very minimal pain, I was hoping that maybe I just needed an extended rest period, and I would be ready to go back to running. Unfortunately, the pain came back on Thursday, and was still present during my appointment Friday. And then, I got the news. My gut was right. Not only did I have a stress fracture in my right tibia, I had two. One in my upper tibia, and one in my lower, both points where I’ve had horrible pulsing pain. And they’re pretty deep too, which doesn’t help. To make matters worse, my left tibia was a bit weak as well. Had I continued to run, it would have been a matter of time before I had a stress fracture there as well. When it rains, it down right pours. 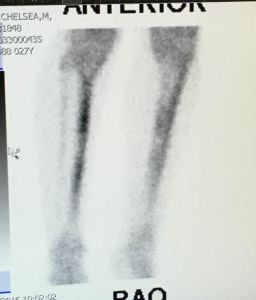 Not what you want to see.

I held it together for the rest of the appointment, but I shed a few tears as I headed into work. Hearing the news of a stress fracture just tears me apart. I’m in new territory here, and can’t be certain how long I’ll be out. I do know that Coastal Delaware Marathon is out though. They still have a half and 9k 😉 Thankfully the doctor understands how much running means to me, and is helping me get back into running in a safe, yet slow timeline. Here’s the projected path of recovering, considering everything goes right.

Week of 3/7: Run 2 minutes slower than regular pace for 20 minutes, three times a week. Continue to do abs and lift.

Week of 3/14: Run 1 minute slower than regular pace for 20 minutes, three times a week. Continue to do abs and lift.

Week of 3/21: Run regular pace for 20 minutes, three times a week. Continue to do abs and lift.

Week of 3/28 and forward: Increase mileage by 10% only, three times a week. Continue to do abs and lift.

*Subject to change depending on pain.

I’m certainly devastated to be injured. I’ve had every emotion under the sun this week, and sunk down pretty far into a hole of despair Saturday. But I needed to hit bottom, to let my tears out so I can build myself back up. I’m definitely nervous and a little fearful I’ll slip back into injury, but I have to take things slow and learn not to push myself too hard. I’ve had about two years of running injury free, so my time was due. And after 16+ years of running, I can say that I’ve finally had a stress fracture, and I will beat it.

Any tips on recovering from a stress fracture?