Week two is in the books, and it went so much better than the first. I was happy to be back on somewhat of a routine, but having friends around to join in my runs helped to keep me on track. I’m definitely feeling a lot more confident about training after this past week. Especially because I hit my highest mileage in a single week since Wineglass training!

Even looking over each day, I feel a bit exhausted! I skipped any sort of yoga on Monday, mostly because I just can’t get into it by myself. Which is fine, because Monday is rest or yoga, but hopefully I can find a yoga class to join that fits my schedule.

Tuesday I wasn’t feeling so hot, so instead of going to the gym, I stuck to the treadmill. I had mile repeats on the schedule, so I pushed through and got them done, just above the time I needed. I think I’m actually starting to enjoy speed work on the treadmill because it keeps me focused on the pace, even if it doesn’t exactly line up with the set speeds. I followed up with abs and a little bit of lifting.

Wednesday I met up with the marathon girls and we ran along Lester Trail. My legs were a bit stiff from Tuesday, but it felt good to be on softer ground. I hadn’t been able to run Lester much since the time change, so it was nice to get out there and run one of my favorite trails. Once I got home, I did some abs. 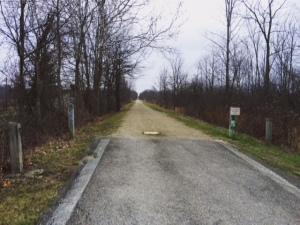 Thursday was a bit tough. My legs were definitely feeling the increase in mileage, but I wasn’t going to back out of the run. I met up with Mallory and we ran two loops at Hinckley Lake. It was a nice change, but it can still be a bit challenging with the smaller hills. We kept an easy pace and walked the slippery bridges, no need to fall and injure ourselves!

So peaceful, but so chilly.

After I got home, I tried a new app that Jennifer had mentioned to us. Daily Workout App or DWA from now on, has a variety of workouts ranging from 5-10 minutes and focuses on different parts of the body. I had been using workouts I’d found from Pinterest, but from now on, I’ll be using this to tone my abs, arms, legs,etc. I think it will be perfect to keep me motivated on lifting and my ab routine.

Home screen of Daily Workout App. So many options!

Saturday was my long run, and I met up with a group of 10-12 at Hinckley. Some of us came early and ran a lake loop. After we finished, we met up with the rest of the group and headed out for our road loop. I hadn’t done a long run in a while, so I was a bit concerned how this would go. The first three miles, most of us stuck together, which helped the miles fly by. It was about the three mile point of the road loop/sixth mile of the day, I took advantage of a decent sized hill and walked/fueled while I had the chance. But once I got to the top, I found myself in between groups and spent the next two miles trying to catch up. Eventually I decided to just do my own thing, and run the pace I was comfortable with. I ended up running the last six miles alone but always had the next group in sight. Typically I would have dreaded being by myself, but I spent the time reflecting on the year, thinking of what I want to accomplish in the next 12 months, and singing “Hello” by Adele.

I planned on doing a recovery run on Sunday, but my legs were really sore. I jumped a bunch in mileage, and I didn’t want to overdo it this early on in the training cycle. Instead, we watched the entire Making a Murderer series. Netflix marathon for marathon training? It works.

Overall this week was so much better than last. I ran more, I drank more water and I was able to sneak in a few extra minutes of sleep each day. Mentally I feel a lot more prepared for training, and I just hope I can keep the momentum up.

*Also, Nuun is currently having a discontinuation sale on three of it’s flavors. Right now, Kona Cola, Lemon Tea, and Lemonade are just $4.00! Watermelon is also on sale, but not being discontinued. So stock up before they’re gone!