Last Saturday, while most everyone was running Akron, I ran a local 5k. I knew I wouldn’t be able to run the half marathon where I wanted to be, so I opted out and decided to focus on a shorter distance. Luckily, Brunswick was hosting the Harvest 5k for the Kidney Foundation.

The race was held at Mapleside Farms, and had a relatively small field. Most of the groups of people were there to attend the walk and had done fundraising for the Kidney Foundation, some traveling as far as two hours away for the event.

I met up with Mallory and we got ready for the race with last minute instructions and indoor bathroom stops. We lined up a few feet from the start line, waiting for the faster runners to show up. But they were no where to be found. The race started and it was clear that we would be leading the pack.

I wanted to keep the same race strategy as the previous week, start out slower and negative split each mile. I tried to keep myself toward 8:40, but my legs kept wanting to go faster. And the slight downhill in the beginning didn’t help to slow me either.

From Mapleside Farms, we crossed the street and ran around the development. I wasn’t familiar with the area, but the roads were horrendous. There were pot holes and cracks everywhere, causing me to stare down almost the entire time.

I knew my first mile was too quick, but hoped I could stay with it. I could see the first couple of runners and counted back, I was in the top 10 and was either first or second in my age group.

I was feeling ok, but I was still a little worried that I had gone out too quick. A group of three young girls (high school, maybe?) came up from behind and I stayed with them until the water stop at 1.5 miles. I kept going, but started to feel as though I was working harder.

Little did I know that the first half of the course was all slightly downhill, which meant coming back in, we were running slightly up hill.

I told myself I could hold on for one more mile, but my legs just weren’t moving. It was during this mile that another woman (mid 20’s?) came up behind me. I used her as motivation to keep going, but I just couldn’t catch her.

Shortly after she passed me, the three young girls came up behind me. We continued our way along the route, and started to approach the hill we had flown down earlier in the race. I put my head down and focused on each step to the top.

The girls continued to run and I could feel myself slow down even more. This certainly wasn’t the pace or strategy I wanted, but I couldn’t give up now.

The ground leveled out and I thought we’d have to cross the street to get to the finish. Luckily the route turned us onto a dirt path to the finish, cross country style.

The race didn’t go as I hoped, but I tried not to let it get me down. I didn’t properly execute the plan I wanted, and it left me feeling a bit miserable towards the end. I also know I am far away from good 5k racing shape, but it’s always good to get a few more under my belt.

I ended up taking third in my age group and 11th overall. Mallory ended up with first female overall!

Along with running the race, you received free entry to Pumpkin Village, so we spent some time exploring after the race. It was both our first times to Mapleside Farms, so it was nice to check it out before it got too busy.

Pumpkin Village would be a great place to take your kids. They had a few slides, some mazes, train rides and from the looks of it, a lot more that we just didn’t check out. Even though the 5k didn’t go as planned, it was still a good way to kick off fall! 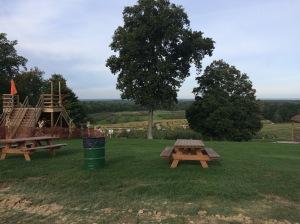