I had a fresh start this week with rested legs and a more motivated mind. Unfortunately, things got busy and I couldn’t get all of my workouts in. Even though I was far from mileage, I did have some good workouts.

Monday I met up with Mallory for some easy miles along Lester trail. It was super hot, humid and buggy so we kept a very easy pace, between 9:45-10:00. It was nice to get a run done on a Monday for once, I felt like I had more energy than normal, and I can start the week not staring down a 0.

I originally planned on doing Jasyoga on Tuesday because I had a dress fitting. But when my appointment was pushed back a week, I knew I’d have time to squeeze in a workout. With the threat of a storm I decided to run on the treadmill in case my workout was cut short. I did four 800 repeats and increased the speed on the last two. I felt ok, but I’m looking forward to getting back out on the track again.

Saturday was my first double digit run of the training cycle. I was a little nervous due to the lack of mileage I’ve been able to get in, but decided to just let my legs do the talking. We had a small group that started at Buckeye Woods to run the HD loop. From BW, we went down the inlet and off on some back roads. The early morning fog was still rising and made for some beautiful views. 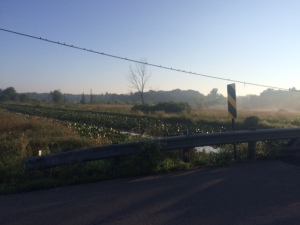 From there we made our way towards Chippewa Lake on the back roads. We stopped for a pit stop around mile 4 or so.

Chippewa Lake in the distance

We followed along the outside of the lake and passed the old amusement park grounds. We had some hills, but nothing too major. I took a Honey Stinger Chew at mile 7 and had a small increase in energy for the next few miles.

We finished up around the lake, and headed back towards the inlet. Once we finally got back to our cars, I had 10.77 on my Garmin, so naturally I made a few laps around the parking lot to make it an even 11. I felt fairly strong throughout the run, our pace stayed  between 9:20-10:00.

One thought on “Akron Half Marathon Training: Week Five”