What a week. If there is one word to describe my training lately, it’s a roller coaster. After last week’s let down, I was hoping to come back strong and nail every run. I’d say I was about 50/50 for runs this week.

I started the week with Body Fusion, and was a little disappointed with class. We used exercise bands and I felt more awkward than anything. Hopefully next week we’ll be back to normal weights and I can feel the burn rather than feel that I look ridiculous.

Tuesday we were at the track. Working my way up on 800 repeats I was able to keep all of them under 4:10 pace, and almost consistent. Motivation was lacking for all of us, and I never felt fantastic, but I got them done. 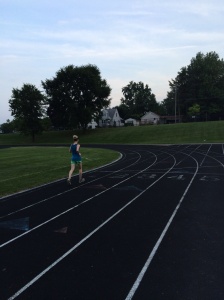 Wednesday I took off, but Thursday I was able to meet up with Second Sole. We had a group of 4 that stayed together and it was finally a good run. It was also the first run in over a week and a half I didn’t have stomach issues.

Friday was a rest day and my last chance to rest up before the weekend of back to back hard runs. Saturday was a local 5k for Type 1 Diabetes, the recap will come later this week.

Sunday was my long run, and I originally planned to do 20. Active Runner had a group run from Strongsville to Medina, and had both a 20 mile and 10 mile option. With a wake up call of 3:45, I managed to get myself up and ready and to Strongsville by 5:45 for a 6am start. Despite being extremely tired, I was ready….until I noticed my Garmin had a frozen screen and nothing I did fixed it. Luckily I could just count the miles with everyone else, but I knew my fueling would be a bit off.

I started with the 11:00 minute pace group because I knew it would be a hilly route. Within the first mile I was already sweating from humidity and knew it would be a rough day. Over the course of the next 6 miles, I tried to count when everyone’s Garmin beeped so I could fuel with water at every mile and Sport Beans every four. I made the mistake of waiting until mile six to take my salt tab, but it starting working a few minutes after taking it.

By this point I could feel that I wasn’t having a great day. The route was hilly and I felt so thirsty. I could also feel my knees starting to hurt and a slight pain in my arch showed up by mile 7-8. At mile 10 I knew I’d have a chance to end my run if I wanted, and well, I took it. I knew with how my body was feeling I wouldn’t have a full 20 in me. I figured I would attempt a few more miles at home.

So I got home, was extrememly tempted to go back to bed, but instead ran out on the trail. Even though I didn’t have my Garmin, I knew the trail well enough that I knew where I needed to go for 2-3 miles. Unfortunately I was only able to get 2 more miles in. I was struggling with the heat/humidity and my arch was starting to flare up again. I called it for the day, disappointed in myself.

This week was a little rough, and it didn’t end like I had hoped. But the more I look back on my long run, the better I feel. I was extremely disappointed in myself for bailing out, but I know I did it for the right reasons. PF is the reason I had to bail on Akron last year, and after running such high mileage in the past couple months, I know it’s likely to pop up again at any moment. I’m glad I played it safe and didn’t force it. I’ve hit all my long runs so far, even if I had to move a few things around. One bad long run cut short isn’t going to break my training.

I’ve got a lot of thoughts going around with this cycle, and I’ll eventually get them all together and share them. For now, I’m just going to focus on this next week and take it run by run. My spirit isn’t damaged, but it has a few dents.