We’re officially halfway through this training cycle and honestly, I wasn’t sure how this week would go. All last week I had a weak feeling in my right knee, which was cleared out after my massage. But then I was greeted with some major pain on my left knee that showed up the day after my 18 miler. These knees really know how to put a damper in a training cycle.

Well, luckily, things turned around. I iced, rolled and stocked up on Ibuprofen all day Sunday and Monday and woke up pain free on Tuesday. Also, the rec center was closed all week for annual cleaning, so I took Monday as a complete recovery day and it did wonders for my knees.

Tuesday I headed to the track to test the waters. After my warm up mile (my 100th mile for the month!) I felt good enough to give 800’s a shot. Previously I felt my pace was a little slow and I wasn’t working hard enough, so this time the goal pace was 4:15 for six repeats. Well, I was definitely quicker than my pace time, but not too uncomfortable that I couldn’t handle it. So it looks like I’ll be working around this quicker pace for future 800 repeats, and hopefully try for more next time.

Wednesday I did my recovery run with Elayna and Ella in the metro parks. We took it easy and I’m glad we did because I had almost forgotten what it was like to run in the heat and humidity. It was good to catch up and the perfect place to get away from my normal running routes. 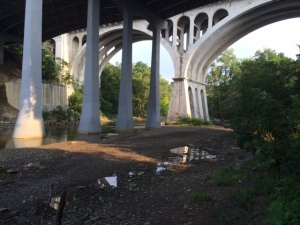 The memories of these parks

Thursday I had planned on running with Second Sole, but got stuck in traffic on 71 and in town due to the fair. Sometimes, an hour just isn’t enough time to get from work to run group. So I ended up running around town on my own, which was pretty good except for the uneven sidewalks and crazy drivers. I wanted to do between 4-5, but the uneven steps gave me a slight twinge in my hip and I decided to call it a day.

Saturday was an interesting run. I had a bad Friday night that led me to not be very well prepared for a long run Saturday morning. Throw in an extra early 4:15am wake up call, and some stomach issues and you’ve got the perfect recipe to the start of a long run turned recovery.

I started with some MCRR at Buckeye Woods, but quickly learned that I wouldn’t last long on the back roads. So instead I turned around and stayed close to the park for when I needed to make a pit stop. All week I had been going back and forth about using this week as a recovery week. My right leg had an off feeling all week and in the back of my mind, I know that running 20 wouldn’t have helped it. I may have been feeling pretty miserable Saturday morning, but I know it was just my body’s way of telling me to take a break. After all, I haven’t had a cut back week in almost a month and a half. And even if the run wasn’t pretty, watching the sunrise over the fog was.

Perk of a 6am morning run

Worth the early morning wake up call

So this week was an semi intentional cut back week. I still have a twinge in my right leg, but it comes and goes. Luckily it isn’t very painful, but more of the feeling that not everything is clicking the way it should. I’ve been rolling it and icing the pain points, but unfortunately, the most uncomfortable feeling comes from when I’m driving. With almost 10 hours a week just for my work commute, I can’t avoid the odd feeling in my hip/quad/knee. So I’ll do what I can in between and hope it doesn’t cause any injury down the road. I can still run pain free, and have no intention of backing off training, I just need to figure out what I’m doing to cause the weird feeling in my leg.