A few weeks ago I came across the Western Reserve Racing website and found the Spring TRAINing 5 Mile/10 Mile race. The object of the race was to beat the train to the 5 mile finish. Those who ran the 10 mile would turn around after the 5 mile mark and run back to the starting line. Knowing that I had 10 miles scheduled for this weekend, I figured it would be a great way to get my miles in, and I was pretty excited for what you received once you finished.

Outside of the Yeti Set Go 10k last year, I’ve never really done any trail running. Even though I ran cross country in high school/college, the terrain would change from grass to dirt to pavement. I wasn’t sure what to expect, so I decided to treat it as a training run.

I woke up Sunday morning to find much colder weather and light flakes of snow. Nothing was sticking, so I hoped they would go away and it would warm up a bit. I left for the race around 8:45 to get there by 9:45 for bib pick up and a restroom break. The drive was relatively short, but all back roads. By the time I was about 10 minutes from the race, the roads were covered in snow and the temperature wasn’t getting any warmer. I finally parked, and got in the long line to grab my bib. Before running not only did you get your bib, but you got a cinch bag (green or orange) and a coffee mug. The coffee mug may have been the only reason I signed up, I can’t resist them.

Anyway, I ended up running into a few MCRR members who were mostly running the 5 mile. Luck would have it, Jeanne and her husband ended up behind me in line while waiting for the porta pottys. We talked about how we had both run the Super 5k the day before and what our paces would be for today’s race. We decided to start together, working on a 9:30 pace and go from there.

We lined up on the road and the race director gave a short talk about what to do when we got to the 5 mile mark and how the 10 milers would come back. The train was supposed to  be a 10:00 minute pace, so as long as you made it to the 5 mile mark in 50 minutes, you beat the train.

Everyone started out pretty close together, and you had to weave in and out to find enough room. We hit the trail, and well, it was certainly less than ideal. Because of the cold weather, it was still frozen, along with grooves of shoes and bike treads. It was also covered with snow so it was pretty slippery in most parts. A half mile in and I knew this would be tough on my legs. 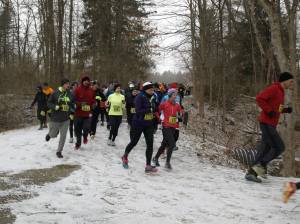 The first mile was a little rough. We kept trying to get solid footing without slipping or running into others, while trying to find a 9:30 pace. We eventually got there and kept it steady for the next couple of miles, passing groups and watching for roots. I was feeling ok, but it felt like I was running a lot quicker than I actually was. I was also a little concerned that my legs wouldn’t be able to carry me the entire way and hopefully I wouldn’t regret running the 5k the day before.

Over the next couple of miles, Jeanne and I kept the pace pretty even, focusing on running the first half quicker than the second. We stayed pretty chatty talking about training and races and making sure we were on time to beat the train. I’ve never run the towpath before, so I wasn’t familiar at all with the path or the surroundings, but because the path was so unforgiving, my eyes stayed glued to the ground, rather than up to take in the views. I  made a note to come back when it gets warmer to really enjoy the towpath, rather than stare at the ground the entire time.

Once we got to mile four we started to hear the train whistle. Thinking it was still pretty far behind, we ignored it. But the noise was getting louder and eventually the train came speeding past. Checking our watches, we were only at 41 minutes, this train was definitely on a different pace than us. We started to speed up and our pace dropped to about 9:00 minutes, running as fast as we could to get to the half way point. We started to see more runners coming back towards so we knew we were close. Following a few twists and turns on the path we finally made it to the half way mark at 47:50. 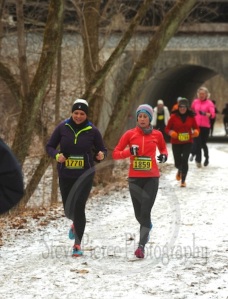 We turned around, got some water, took in some fuel and started back on our last five miles. There was something a little daunting knowing that most people were done, and we still had to run back to the start, but knowing we made it 10 instead of 5 would be well worth it.

We decided on a slower pace on the way back because by now our legs were starting to get a little sore. I couldn’t tell if it was the hill from Saturday’s 5k, the hard surface or the lack of miles that week, but my legs were definitely telling me they would need stretched out afterward. Our pace ranged anywhere from 9:30-10:15. Miles 5-6 weren’t as tough, but by mile 7 I had hit a small wall. We kept chugging along, with the goal of reaching 10 miles at 1:35. The closer we got, the more my body tried to break down. I mentally wanted to keep going, but my hips and knees were starting to ache.

We finally reached the last mile, and knew were we almost done. We went off the trail a bit and on to the road, of course with a hill leading us the way to the finish. At this point any incline was brutal and all I could think of was the giant cinnamon roll from Panera I was going to devour once I finished. 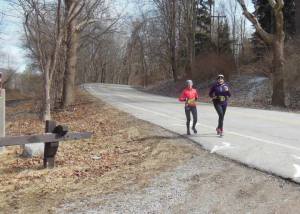 We came off the road, rounded out a small path and came across the grassy area of the finish. By this point we sprinted and gave everything we had left in us, beyond excited to see the finish line. We crossed the line at 1:36:32, just 1 minute and 32 seconds off our goal.

Once we finished we stood in line to get our post race goodies and hopefully our medals. They announced that the train was indeed 7 minutes early, and that as long as you hit the 5 mile mark in 50 minutes or less you would receive your medal. Along with the medal, there was ice cream, bagels, hot chocolate and a few other little things. By this time I was freezing, so I packed up and headed home.

Overall I really enjoyed this race. I went in using it as a training run, but I think it’s a good course to use for a PR. It’s mostly flat and as long as the ground isn’t too slippery, it’s pretty quick. I honestly don’t think I would have done as well if Jeanne wasn’t running with me. She pushed me to keep a consistent pace even when my legs were starting to give out.

The thing I got most out of this race, was a good test to see where I am with my training. I’m right where I need to be time was to knock off a few more minutes to reach sub 2:00. With over 8 weeks left, there isn’t a doubt that I can do it.

The event was well run and the race swag was definitely not your typical t shirt. Despite the cold and snow, I’ll keep this as an option for a spring race next year. And considering this is my first 10 mile race, I ran a PR! Now I have something to look forward to when I run the Hermes 10 Miler next month!