What a week. I wish I could blame the weather for how different my schedule was this week. In fact, I think I will. This week was way off schedule, but I did what I could. It wasn’t my best, but luckily it ended on a high  note.

Monday, I skipped my Body Fusion class, but for a good reason. Darren came home after a week in India, so naturally I wanted to spend time with him. Knowing he’d be working late all week and transitioning into a normal time zone again, I knew it would be our best chance to spend time together until the weekend. Selfish yes, regret working out, nope!

I missed the perfect weather on Monday night, but took advantage of the decent weather on Tuesday night. It was a bit chilly and dreary, but I was able to get three miles in on the trails before it got too dark. The trail had some sections that were completely covered in ice and snow so there were a few moments of walking, but it felt so good to get outside, in shorts! I discovered a new section of trail, which was a good way to pass the miles.

Wednesday was a complete mess. With the snowstorm all day, traveling home was a disaster. I opted to switch Thursday’s Yoga or run day with Wednesday’s run. I was absolutely exhausted, but was able to do a 20 minute Power Yoga video in the basement.

Thursday, I somehow ended up with too many options. Our Second Sole has started group runs every Thursday at 6:30. We also had a MCRR group run/bar crawl at 7. Due to traffic, I decided to go to the later run, and was so glad I did. 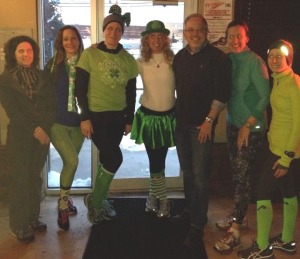 Some MCRR decked in Green!

We started at Johnny Malloy’s and ran the back way through town to a bar called Cin Dee’s Place. I had never heard of it, but we ventured to the other side of the tracks, so I had no idea what I was in for. Once we got there, we had some drinks and decided to venture back to the original bar. By this time it was dark and almost not safe to be out running. The sidewalks were a mess, but luckily the cars were kind enough to share the road. We made it back, had a giant feast and ended up drinking/eating until 11:00pm. It definitely wasn’t a typical run, but it was a lot of fun.

Saturday was St. Malachi, more to come on that later this week. I knew I had between 9-10 on my schedule, so I opted to run 5 miles at the race and finish the rest at home. I was desperately seeking some soft ground to run on, and since most of the snow was gone, I headed to Buckeye Woods.

My legs felt tight and heavy, but after spending an hour in the car post race, I figured they’d just need a little bit of a shake out. My first mile was 8:58, but I felt like I was going so slow. My legs were still tired and stretching wasn’t helping. I ended up doing two loops around the marsh, hoping the longer I stayed on soft ground, the better my legs would feel. By the time I headed back through the woods and towards the car, my legs were screaming. My legs were dead and I couldn’t go a step past 4 miles. With 9 miles total for the day, my last four ended up something like this….2.5 miles under 9:00 minute pace, 1 mile at 9:04 and the last half mile was definitely above 9:15/9:20.

However, considering I spent an hour sitting in between running, I’m not surprised with how tight I was feeling during the last four miles. I am surprised I was able to knock out the last miles at or around a sub 9:00 minute pace.

Just me and the trail

I had hopes of doing a shake out run on Sunday, but ended up with a bad migraine that took me out for the rest of the day. I was so miserable, that even doing some light yoga was out of the question. So unfortunately I ended under where I wanted to be for mileage, but all things considered, it was still a pretty good week.

Who else ran St. Malachi? Have you done at home workout videos, which ones are your favorite?

Weekly Type 1 Diabetes Fact: If you or a someone you know has been diagnosed with Type 1 Diabetes, you should know that you’re not alone. There are a number of places that you can turn to for support or knowledge about Type 1. Each of these groups can help you understand Diabetes more, help you find others that also share this disease, and ways to help you live your life to the most.

The biggest thing is knowing that you’re not alone, and that you don’t have to go into this blind. There’s always something new to learn and events to reach out to others with Type 1 Diabetes.

If you’re interested in donating to help cure Type 1 Diabetes, you can help here.

Error: Twitter did not respond. Please wait a few minutes and refresh this page.