One of my favorite places on the West side has always been 87 West, the adorable wine bar inside Crocker Park. It was always the perfect place to catch up with friends or rewind after work. Since we moved to Medina, we’ve noticed that it was missing a wine bar, something I’m finding is hard to live without. That all changed when a new gastro pub & wine bar opened up this past week. Lager & Vine Gastropub & Wine Bar ventured out from the East side and has opened shop on the square in little ole’ Medina.

We decided to try it out last Thursday night and we were pleasantly surprised. The inside had a very cozy feel and already had a few holiday decorations up. We sat at the bar to get a good view of the football games, and were greeted by a number of people at the bar and from the kitchen. They had a pretty large drink menu and had everything from beer, cocktails and wine. The beer list was a decent size and included both beer on tap and from bottles. The bar tender mentioned they rotate beer regionally, but unfortunately didn’t have two of the most local beers on tap at the time, this meant no Great Lakes or Lagerheads. They had a better choice of wines than most restaurants, but for being a wine bar, they didn’t have as many as I had hoped.

We started off with an appetizer before our main meal, all of which had pretty quick service. We started with the lobster bisque, which came in a large bowl, definitely big enough for a lunch serving. I thought it was really good, Darren thought it was ok. I love almost all seafood chowders/bisques, so it’s pretty easy to make me happy.

Next we followed up our appetizer with dinner, which neither of us could decide on what we wanted for sure. I was in between the Chorizo Mac and Cheese and the Tomato Basil flat bread, but decided on the L&V Blanco flat bread. Darren chose the Asian Spice Ahi Tuna Tacos, but I think he was temped by the steak. 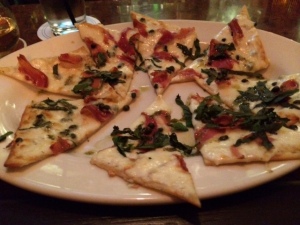 Overall the flat bread was really good, I ate almost most of it and wasn’t feeling too stuffed when I finished. Darren wasn’t the biggest fan of the tuna tacos, but that’s a hard meal to please everyone with.

Lager & Vine’s menu definitely has a great assortment of food that I know we’ll be back to try. The atmosphere is great, and I can tell this is a place where we’ll be spending a lot of time. I’m excited to see how the future of the restaurant grows and hope that Medina enjoys it as much as we did!

Have you ever tried Lager & Vine in Hudson?