Surprise, I tried something new and ran a trail 10k Saturday night! I secretly had my eye on this race for quite some time when the Yeti Set Go adventure run series was sent out to the local Medina area. I went back and forth about it for quite some time, but decided to give it a shot. I am so glad I did and couldn’t wait to share my race recap. I didn’t have a time goal set for the race because A.) I haven’t run a 10k in about 4 years, B.) The race was at night, and by night I mean an 8:15 PM start and C.) The race was on trails, which isn’t something I normally run. I went into this race to have fun and enjoy 6 miles in a place I’ve never run.

I also used this race as a way to try out my Flying Pig race day outfit, Asics shorts, Pro Compression Socks, and Lululemon long sleeve shirt. I also wore my Brooks hat with the lights under the brim and used a head lamp. Some kind of light was a requirement because the sun was setting as we started. I also brought along a small flashlight and kept in in my back pocket. The course was set for us to run a loop around the pond/marsh, run a loop in the woods and then run the first pond/marsh loop again. The race wasn’t timed, but we lined up, and we were ready to go. I wish I was able to take pictures during the first part of the race, the first 15 minutes we absolutely beautiful with the sun setting over the lake and farmland. 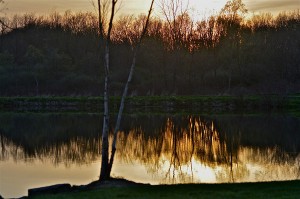 Right before the start, courtesy of MCRR 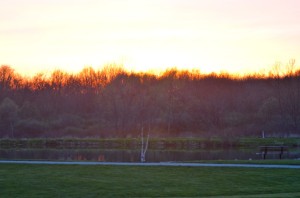 Once we started we headed through a small  portion of the woods and made our way through the first loop of the marsh. I ran without music, and was so glad I did. You could hear the frogs croaking and the geese honking and hissing as we ran past them. The first loop was about two miles, the ground was crushed gravel and it was absolutely perfect. I held steady at just under a 10:00 minute pace and was right in front of a larger pack. I didn’t want to go out too fast, but knew if I did, I could fall back and still have group support to keep going. The path made a few turns, and some small inclines, but it was relatively easy. I felt great running and I was so happy, a feeling that hasn’t been present in all of my runs this training cycle.

We finished up the first loop and headed into the woods, the sunset was still bright enough that we didn’t need the lighting. Those first two miles had the best views I’ve seen running in a long time, seriously I could go on for hours about how amazing the sunset was. We continued through the woods and were greeted by the Yeti, who chased a few of the runners. He had a ribbon on him and if you were able to catch him and grab it, you’d win a prize. I didn’t get it, but it was fun to see.

At this point we turned onto a smaller dirt path. I turned on my headlamp and was ready for the challenging part. There were a ton of tree roots so footing wasn’t always the best. My pace slowed down a lot, but I’d rather be safe than fall and twist something. It began to get dark much quicker now and I ended up following a man and his son. I felt safe behind them, knowing if they came along a root or hole, they’d be able to warn me. Around the three mile mark I passed them, and slowly gained some space in between. A little while up I realized I was by myself and was a little nervous I’d get lost. Luckily the path was well marked with giant arrows and volunteers were out to tell us which way to go. At that point the path was becoming grassy with spots of mud. We had a small out and back, which was no doubt the hardest part of the race. It was absolutely black and the trees on both sides were as thick as could be. I kept running, hoping I was moving in the right direction, and almost scared that an animal would jump out ahead of me. I got to the turn around and made my way back, this time the headlamps of oncoming runners welcomed me as I made my way towards the last part of the wooded loop. I was joined by a runner from the larger group and we ran in silence together, step for step we stayed in pace for a half mile until he pulled away for the final loop.

We headed towards the first loop around the marsh, this time it was much different. There was some faint light in the distance, and some from the stars, but it was still hard to see. It was odd knowing that I had just ran this path 40 minutes ago and it was lit up from the sunset. Now, I had some idea of where I was supposed to be running, but couldn’t see more than a few feet ahead of me. My pace was started to quicken again and I could feel the adrenaline starting to fill my body. The frogs were much louder this time, kind of eerie, but also really neat. Some parts of the path were really cold and and some were warm and humid. With my sight limited to a small spot ahead of me, my other senses were on full alert, picking up things I’d normally ignore in a regular race. My Garmin beeped and I was at mile 5, my pace was around 9:30 and my legs were feeling great. I started to pick up my pace a little more, as I noticed how strong my entire run had felt. I finished up around the marsh, and headed back into the woods. The crushed gravel path let me back to the start and the closer I got, the faster I ran. I had a few more turns and I’d be done, finishing my first trail 10k.

I was handed my medal, but more importantly, I got out of my funk. Regardless of time or pace change, I felt strong the entire race. I never needed to stop and stretch or walk or take sport beans. My training this time hasn’t been exactly perfect, far from it, but I’ve been waiting for the run to pull me back to my normal self. I loved this race, the whole experience was amazing. Running at night was almost an out of body experience, and I encourage everyone to try it. I’m definitely going to consider more trail races if they fit into my schedule. 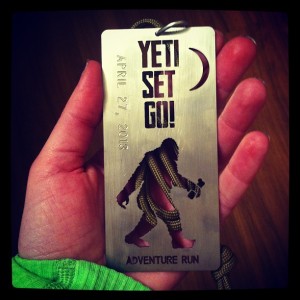