Here we are with one month to go. I personally feel that these next two weeks will be crucial. I’ll need to get some good distance running in before I have to taper. This certainly hasn’t been the most normal training schedule, but not all are. You have to have expect that something could always come up and push you off your schedule. Luckily I’ve been able to bounce back,  and hit the long miles that are most important. This week didn’t go exactly as planned with a busy schedule most of the week, but I was able to get a few runs in. It certainly was a low mileage week.

My long run was not so long. The plan was to run 16-18 on Sunday, but as soon as I woke up I knew it wasn’t in the stars. I completely forgot that I need to charge my Garmin and iPod, so I kept pushing back my starting time to get good battery life out of both. I also made the mistake of checking the weather over and over. It was under 40 degrees out, my nice warm bed seemed like a much better idea at this time. Wasn’t it just 80 and I was smothering in humidity on long runs? I also kept reviewing my route I mapped out. I knew it had hills, and that was ok, but these were monster hills. They were waiting to eat me alive.

Finally  by 8:30 I got out the door somehow and was ready to tackle the run. I worked through my first section with some mild hills and the most beautiful view of Lake Medina. That view was worth getting up to see, the perfect moment to relax and reflect. 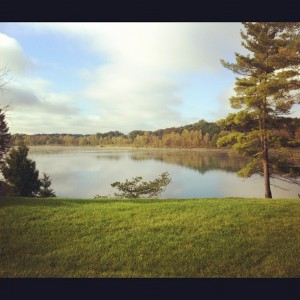 After I took a few minutes to breath, I started towards the back roads. They were full of hills, no sidewalks and the twists and turns that leave you guessing what’s coming up. I get nervous driving these kinds of roads, so running them was an experience. I made my way to some familiar streets and realized how bad the hill work was getting to me. My knee was aching and these were the “baby” hills of the run. I mentally shut down and decided I was done for the day. I wasn’t going to tackle hills on unknown back roads, I wasn’t going to reroute and find some “flatter” ground. I was heading home.

I felt guilty for quite some time. I should have been running longer, I shouldn’t have given up so easily. The 7 miles I did was far from the 18 I was supposed to do. But after a while I knew it was probably the better decision. I had two weeks of long, tough runs, and normally I should have pushed through another. But coming back after injury, I can’t afford to end up hurt again. Sometimes you need to mix in the mid distance run to help your training. I had a good run pace wise, and I was able to battle some pretty tough hills. Sometimes that’s harder than going the distance.

I’ve thought a lot about training in the past few weeks, especially after this week. I’m trying to figure out where I can play catch up or if it’s possible to get some good mileage in. I’ve been able to do it, and it’s been hard. After a long day, the last thing I want to do is run, I’m ready to veg out and crash on the couch. But I do try to get two weekday runs in, if I can. It’s been easier to wake up on the weekend and head out the door, partially because I’m still half asleep  and have no idea what I’m in for. But the hardest thing yet, is running by myself. I’ve always enjoyed running with music and setting my own pace, but running long distances of 14+ is hard when you’re doing it alone. I feel grateful that I’ve been able to do all my runs by myself. I’ve learned a lot about me as a person and as a  runner.