Better late than never, but here’s my recap of Akron. This past weekend I spent time with some amazing Muskie ladies. Friday after work I headed down to Akron to meet up with Team Muskies, Party of 5. We explored the expo, I even made it through without opening my wallet. Score! We even got a picture with our “M” flag. 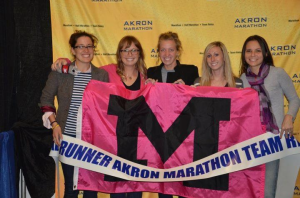 After the expo, we headed up to Bravo! for some pre race pasta binge. I’ve never been to Bravo, but it has been added to my list of top restaurants. The next thing on our to do list was our team meeting, our captain Kimi did a wonderful job getting things ready and organizing everything! We set our alarms for 4:30 am, which came quick and we were out the door by 5:00 am ready to go.

Our goal was to finish by 11:00, giving ourselves 4 hours to do the full marathon. Kimi had the first leg, and she did great. I almost missed her because she was ahead of her projected time, way to go! I had the second leg, 5.7 miles. It was such an odd feeling jumping in after t he race started. Some runners already looked beat, so I was a little nervous for what I had ahead of me. I also found it hard to figure out my pace, just not knowing where I was or the pace of the fellow runners around me through me off.

I felt good, and my knee wasn’t too sore, but my legs were a little tired from racing for the past two weekends. I also noticed that there were many hills. Hills that I don’t train on. My guess, 90% uphill. But it was good to train on, and I finished in under my projected time! I passed my wrist ban off to Jessica, and met up with Kimi to race to the finish line.

While we were stationed at the 26 mile flag, Jessica, Jen and Molly were running their legs, bringing us to a solid victory. Our team did great, we all ran under our projected time, and finished at 3:54. A whole six minutes under our projected time! Go Muskies! We even had some pretty awesome race gear to make us run super fast!

Akron was a great experience, I met some amazing ladies who share the Muskie bond, and now share the Akron Relay experience. They also persuaded me into wanting to run……a marathon. Yes, its official, but not this year. That’s a story for another day.