>13.1 Miles. Months of training and nerves at their highest, I can’t believe that in a matter of hours, everything I had worked for came together and is now over. This is the experience of my first half marathon.

Sunday started for me at 3:15am. I was so excited/nervous that I couldn’t sleep any longer. Got up to take a shower and there was no hot water in my building. Looking back, I think it was a way to prepare me for the cold I would endure later on that day. The weather was a perfect, for me at least, this was going to be a good day. Melissa and I arrived downtown around 5:30 and met with my Aunt Lori who would be running with me. Just walking from the car to the stadium was unreal. I couldn’t believe that the day had finally come. It was great to see runners in every direction, hoping it wasn’t too obvious that I was doing my first half.

Between figuring out where I needed to be in the starting line, and visiting the restroom half a dozen times, the hour to wait until the official start time seemed like forever. We were all packed like sardines, waiting to get this thing started. It took about 10 minutes to cross the starting line, and I could begin my journey. The first mile or so was crowded and to me didn’t really count. There was no way you could get to your pace, and most of the time was spent dodging people trying to get into some open road.

Around mile two I was finally in my pace, sub 10:00. I didn’t have a goal time, but I was hoping to do a 10 minute pace and just finish. I think for the first time in my life I was ok with going that slow. It would be a long hard run, and after mile 10 I didn’t know what to expect, I’d never run that far. The next couple miles seemed to be going all well. I had a good pace and didn’t need to stop at the first drink station. However, I was trying not to let the amount of miles left get stuck in my head or else I knew it’d be downhill from there.

Between mile 4 and mile 8, I think I had the most activity/changes/whatever you want to call them. We got off of the main roads and started in on some side streets, the change of scenery was good, especially when I looked up right before the 4 mile clock and saw one of my best friends cheering for me. Such a great surprise, considering how early it was, and how iffy the weather had been all morning. I noticed the streets where beginning to show true Cleveland spirit with potholes at almost every step. In the game of trying to avoid other runners and the potholes that were like a hidden mine search on the ground, I noticed that my arch in my left foot wasn’t too happy about what I was doing. I just decided to ignore it and continue on.

Mile 5 drink station was well needed and somehow I lost my aunt. I knew the pace I needed to continue on so I kept going, thinking she was ahead of me. About a mile later she came up from behind and we were able to keep our pace and make it through the halfway point of the half. Quarter of full marathon down, but still had to spend another hour out on the roads.

Closing in on mile 8, my body was slowly starting to resist wheat I was doing. The pain in my arch was getting worse, my knees were starting to question if I could make it the whole way and my sides were taking turns cramping up. I did what I knew I was allowed to do, but wasn’t too proud of, I walked. Luckily a drink station was right around the corner and I was able to full up and get another mile in the books.

Looking back now, I don’t remember much of mile 8-11. I know that I slowed down, I was cramping and I had doubt that I would be able to make it. But I kept telling myself, Pain is temporary, pride lasts forever. I had come this far, I had to make it the whole way. The crowds were amazing, just when you mentally start to break down, they’d be cheering you on. One woman in particular would ride her bike to different spots throughout the race, holding up signs to cheer us one. The one sign that kept me going was along the lines of “millions of people didn’t wake up early when you were on the starting line today” Very true, this is what I love, this is who I am. I run, and I was determined to cross that finish line. Coming back into downtown, my aunt and I separated, but I started to think that after two miles, I would be a half marathoner. Not sure if it was the rain, wind or cold, but I started tearing up just thinking about all I had done to get ready. I was putting my all into this race, I wasn’t going to stop. The last two miles, I’m sure I had a steady 12 minute pace, at least it felt like it. I couldn’t open my stride, and there was no way I was going to have a sprint finish like I was able to do in college. Seeing the blue tower at that last turn was incredible. I don’t remember getting there but I crossed the finished line. 2 hours 15 minutes and 46 seconds later I had become a half marathoner. I was exhausted, sore and freezing. My aunt gave me a huge hug and I told her I wanted to do another one.

The feeling afterward was beyond what I had expected. I knew I’d be sore, I knew I’d be tired, but I don’t think I’ve ever worked that hard for anything in my life. My arch and right knee are shot, along with many muscles in my legs being stretched and sore. But it’s a good pain, an “I gave everything I had and then some to make sure I crossed that finish line” sore. And knowing that I wasn’t in the shape I used to be in two years ago (Goodbye 7min. mile repeats) I think I did great.

So what’s next? I plan on taking this week off completely. As much as I’d love to hit the treadmill, yes, I’ve started to have a change of heart. I need time off to let my body heal. I’m looking forward to getting my road bike out and doing some cycling through the metro parks. I also plan on running another half in the fall, and of course I already have one picked out. After going online, I’m really interested in doing the River Run Half Marathon. It starts in Berea and goes through the metro parks and an almost continual down slope for the 13.1 miles. Sounds like a perfect run to do in the fall. I’m looking forward to doing some 5k’s and some possible 10k’s this summer. But one thing is for sure, I have no desire to run a full marathon….at least not this year.

My first race, at the Cleveland Marathon when I was 4 years old 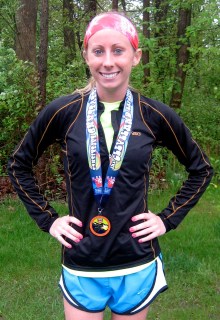 My first half marathon, also at the Cleveland Marathon